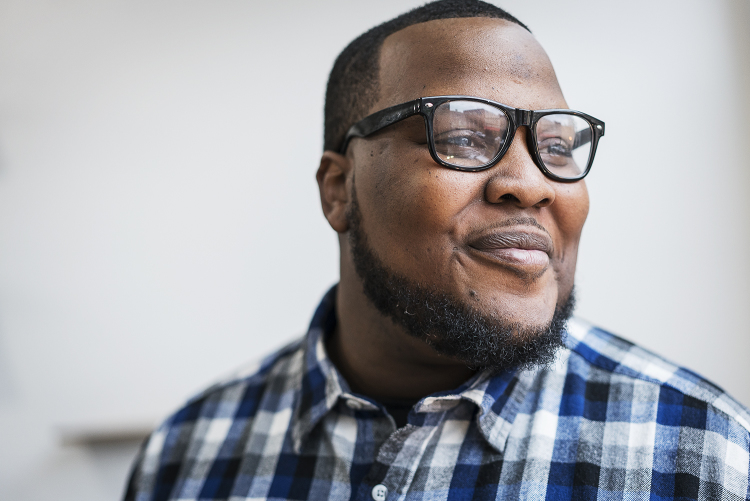 Understanding how GoodBoy survived launching a business amid tragic circumstances is as simple as understanding the resilience of Flint’s people.

“We didn’t let the environment and what happened control our outlook,” Mixon says. “It was pretty bleak at the beginning. We didn’t know what the effects would be. However, we had an optimistic outlook and said, ‘Flint’s gonna come out on top, we’re gonna get through this.’ Let’s persevere and tell that story.”

Originally from Niagara Falls, New York, Mixon moved to Flint during his childhood. He graduated from Flint Northern High School and grew up on the north side, near MLK and Welch boulevards. He says Flint’s history and culture became “grafted into” him, and he’s adopted the city’s ethos into his clothing brand.

“It’s very industrial, blue-collar. I call it ‘small city, big culture,'” he says. “That influenced my creativity as far as how I design. The people here, they’re about community, about building up their city, shifting the culture. Those are the core values I come from when I create.”

Mixon’s business began by investing his $1,000 tax refund into T-shirts and bow ties featuring his GoodBoy logo. He initially sold them out of boxes. Now, his store occupies prominent space in downtown Flint on Saginaw Street and features numerous streetwear-inspired styles and collections. He was the recipient of a $20,000 AT&T Agility Challenge grant in 2016, and partnered with the Crim Festival of Races, an annual series of races in Flint that attracts thousands of runners to the city, to design shirts in 2018.

But GoodBoy was also part of a bigger movement — a celebration of the values that are distinctively “Flint,” expressed creatively through fashion.